The Bone Collector Uncovers Mystery of Sea Creatures!
Keith Rittmaster, Curator of the NC Maritime Museum, and marine mammal stranding network partner, is featured in the Tar Heel Traveler. Keith has been studying marine mammals in Carteret County for over 30 years. An overview of his incredible work and legacy is described in the video clip! We are grateful to work with Keith and have access to his knowledge of NC marine mammal history, bones, life history, and marine science.  https://www.wral.com/lifestyles/travel/video/17805194/ 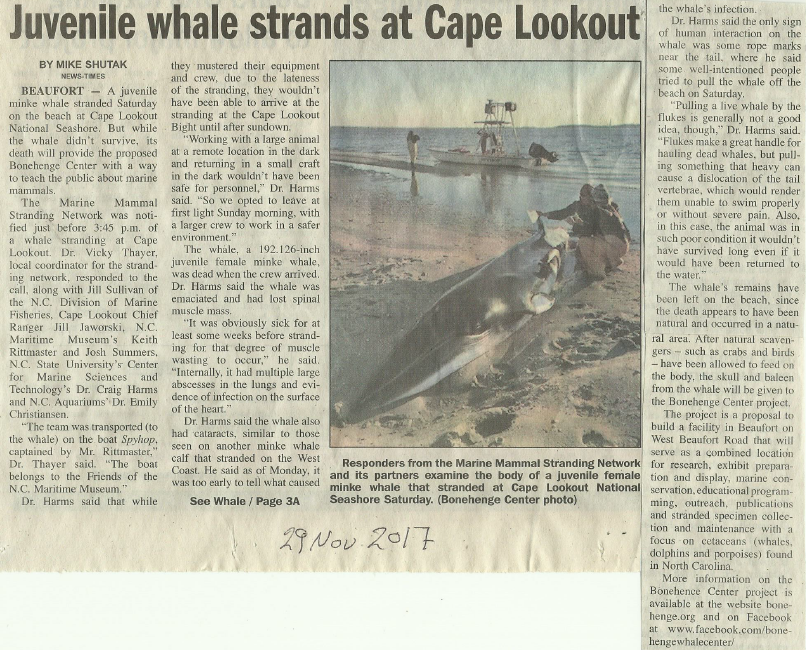 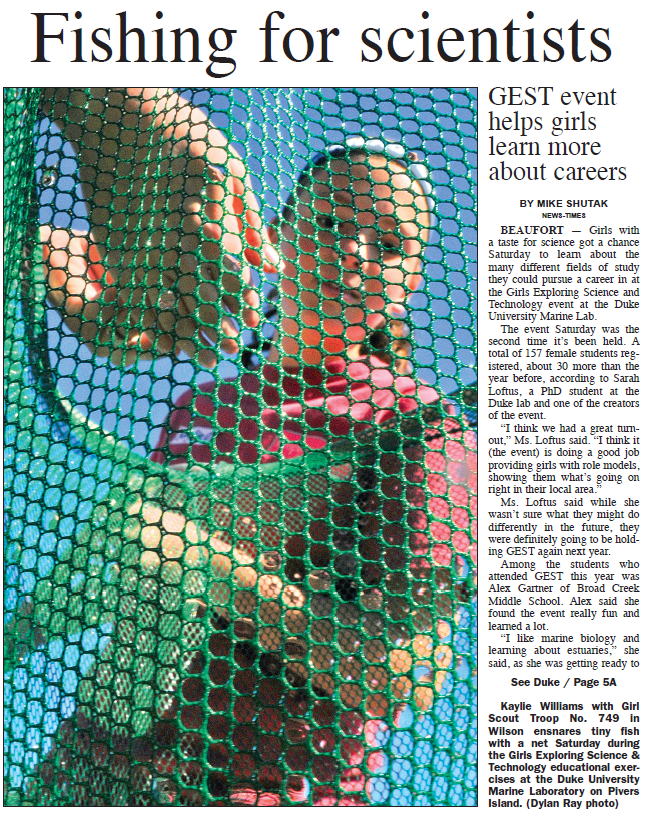 Marine Mammal Strandings from Necropsy to Rearticulation
Chloe Mikels is a rising sophomore at Cornell University and a former NC State CMAST intern. During her time as an intern, Chloe observed the process of marine mammal strandings from start to finish.  Typically, once marine mammals strand on beaches, the stranding team is contacted and the animal is necropsied on site or transported back to NC State CMAST for a lab necropsy. If the animal is in good body condition, the bones may be saved for rearticulation.  The rearticulation process takes several years and begins with burying, preparing, and sorting the bones. Assembly on the skeleton can then begin.  Chloe talks about her experiences with Dr. Vicky Thayer, Marine Mammal Stranding Coordinator, and Keith Rittmaster, Curator for the NC Maritime Museum to The Shoreline, a Pine Knoll Shores newspaper. 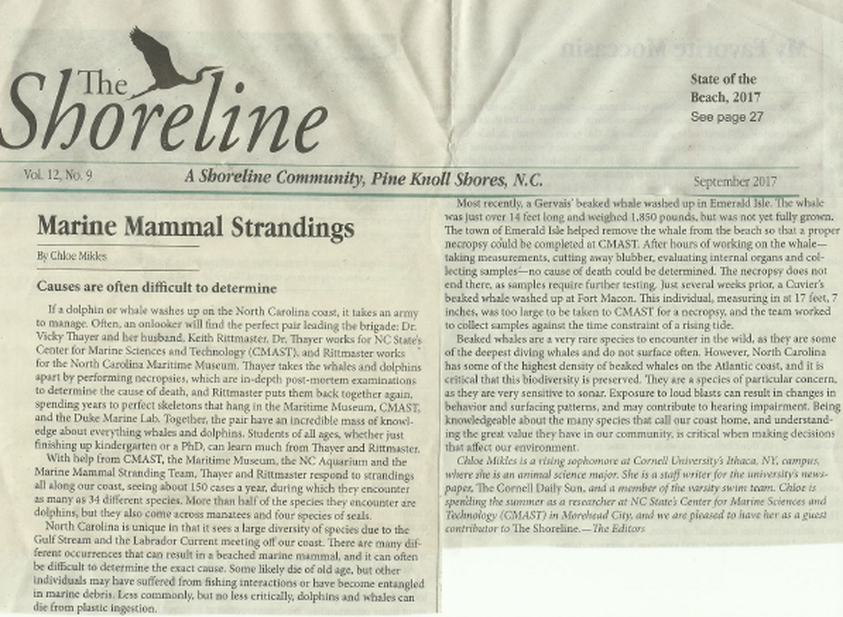 Gervais' Beaked Whale, Emerald Isle, NC
A dead stranded whale (Mesoplodon europaeus) was reported to V. Thayer by Donald Wells, NC Sea Turtle Patrol Emerald Isle Team Leader at 0630 h.   V. Thayer assembled the stranding team and then called Emerald Isle Police Department (EIPD) and Emerald Isle Public Works (EIPW). The stranding team (including staff from NCMM and NCAPKS) headed to the beach. The Emerald Isle Public Works truck and backhoe went to the beach and assisted the stranding team by lifting the  439 cm long whale into the back of a long bed truck and transporting it to the Hibbs Road weigh station to obtain a weight (839 kg) of the whale, and then to NC State CMAST, where a necropsy was conducted. The necropsy was completed at 1630 h. The sub adult male whale was not emaciated but had no stomach contents. Urinalysis indicated the animal was dehydrated. There was not an unusually heavy parasite load, but a moderate load of Phyllobothrium sp. and Monorhygma sp.. No Crassicauda sp. were found. Skeletal components were buried or macerated by K. Rittmaster and J. Summers and additional NCMM volunteers for further study and articulation for educational display. 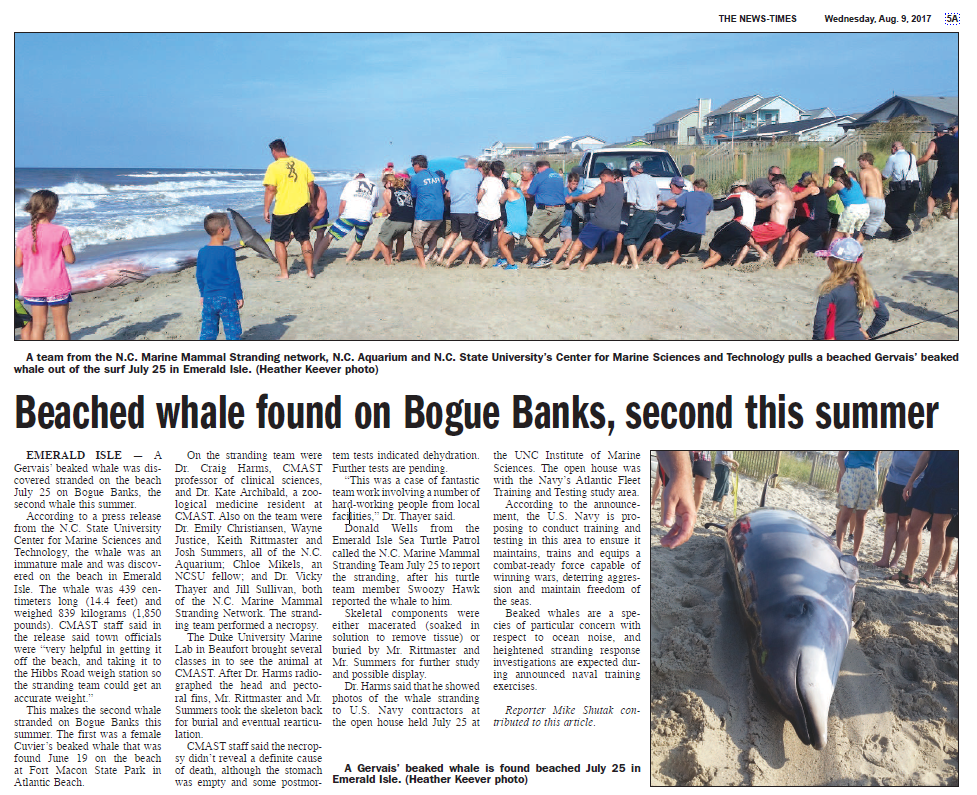 Cuvier's Beaked Whale, Fort Macon, NC
On Monday, June 19th, the North Carolina Marine Mammal Stranding Network responded to call from Fort Macon State Park rangers reporting a 535 cm long beached whale near the jetty. Once on site, the stranding team identified the animal as a rare beaked whale, Cuvier's beaked whale (Ziphius cavirostris).  Many local organizations including the NC Maritime Museum, NC Aquariums, NC State College of Veterinary Medicine, UNC Wilmington, NC Division of Marine Fisheries, Duke University Marine Laboratory, and the NC State Center for Marine Sciences and Technology assessed, measured, and conducted a necropsy on the mature female. The necropsy revealed a heavy load kidney parasites and corresponding mineralization in surrounding vessels including the dorsal aorta.  Final diagnosis is pending histological evaluation.  The skeleton of the animal was buried and will be exhumed for rearticulation in the future. 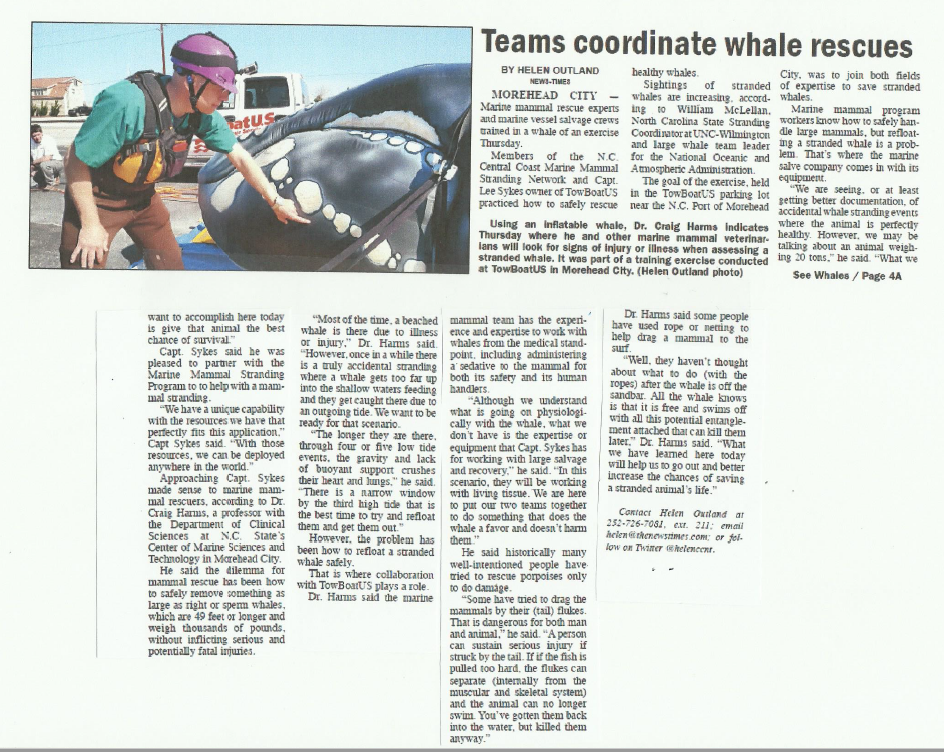