The NC Central Coast Marine Mammal Stranding Network is proud to support and contribute to many local programs focusing on conservation, recycling, preservation, ecology and fundraising. Visit the websites below for more information on how you can become a part of the action. 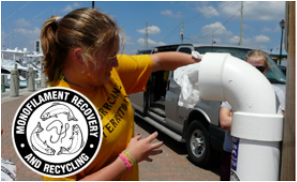 Keith Rittmaster (NC Maritime Museum Natural Science Curator) and Dr. Vicky Thayer (NC Central Coast Marine Mammal Stranding Coordinator) started the North Carolina Monofilament Recovery and Recycling Program to address the issue of marine wildlife monofilament line entanglement. This program was created to raise awareness about the negative impacts discarded fishing line has on marine life, install and monitor monofilament fishing line recovery and recycling stations, educate recreational and commercial fishermen about safe ways to discard unwanted line, and decrease the amount of fishing line entering coastal waters and increase the amount of fishing line recycled.  As of August 2015,  over 1800 miles of monofilament fishing line has been collected and sent off for recycling since inception of the NC Monofilament Recovery and Recycling Program in 2007, see graph for further details. To date, there are over 40 recovery and recycling stations in the central NC coastal area.  Please visit ﻿ http://capelookoutstudies.org/NCMRRP/ncmrrp.shtml for more information on how you can help recover and recycle unwanted monofilament line and to donate to this project.﻿﻿﻿ 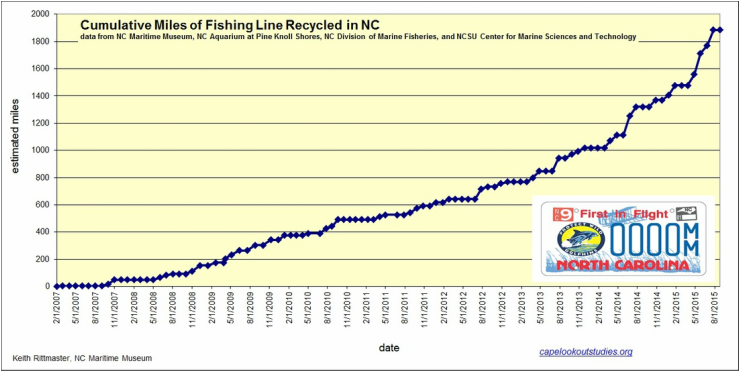 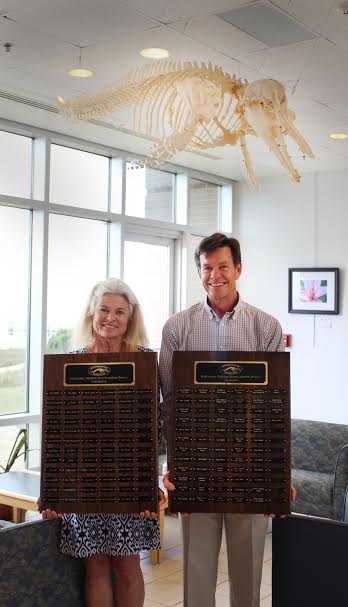 "Josie," a bottlenose dolphin skeleton, is the newest addition to the CMAST family, now flying high in our lobby after a long journey from sea to ceiling. CMAST's Dr. Vicky Thayer, Skeleton Crew Rearticulation Project Coordinator, saw the project through from inception to completion when it was mounted in the CMAST Lobby May 2016. The skeleton has been in progress since 2010. Sixty-four generous contributors who "bought bones" funded this project, along with Dr. Thayer and Keith Rittmaster of the NC Maritime Museum, who contributed materials towards the project.

"Josie"--so named after one of the technicians who worked on the project, Josh Summers--was a 255 cm long mature female bottlenose dolphin that stranded on Ocracoke in 2009. The professionals doing the necropsy found that the dolphin had a stingray spine in the right lung which contributed to the cause of death, but the animal also had severe dental attrition and rib fractures. The project started after the dolphin stranded in December of 2009 on Ocracoke. Josie began pulling her weight as an educational agent right away, as she was necropsied on January 30, 2010 for a stranding training with people from various organizations: NC State College of Veterinary Medicine, NC Maritime Museum, Duke University Marine Lab, and many local volunteers. The skeleton was labelled and buried the same day, January 30, 2010 at Gallant's Channel in Beaufort. Burying the skeleton facilitates the cleaning of the bones. It was exhumed on October 23, 2011 with help from a Carteret Community College  Environmental Biology class. At this point, the skeleton construction began in earnest. It was a labor of love performed by a cast of many. Sixty-two volunteers worked on this project from 2009 to 2016.

"My favorite part of this project," said Dr. Thayer, "was seeing the incredible attention to detail, engineering, ingenuity and repurposing that is required to make this happen. I have a new appreciation of skeletons of all sizes and shapes in museums everywhere after coordinating this project." The skeleton is a striking addition to the CMAST lobby. It is hoped that Josie will be joined by an adult sea turtle skeleton sometime in the future. CMAST would like to thank the following, for making Josie's new home possible: NC State  CMAST, NC State College of Veterinary Medicine, The 2016 Class of Semester @ CMAST students, North Carolina Maritime Museum, Carteret Community College, North Carolina Division of Marine Fisheries, Bill Winner and Terri Lomax, Daniel Solomon, Dave and Jenny Eggleston, Josh Summers, Keith Rittmaster, Meg and Bill Rawls, Charles Jason Smith, and all the rest of the donors and volunteers.

The North Carolina Maritime Museum (NCMM) has a license plate program with a great conservation message. By purchasing the special "Protect Wild Dolphin" NC Maritime Museum special license plate you will be supporting the museum's research, conservation and education programs. Demonstrating your interest in protecting bottlenose dolphins and their habitat and making your car look better!
The NCMM license plate proceeds help protect and increase our understanding of bottlenose dolphins that frequent the North Carolina coast. Revenues from the plate sales will go the Friends of the Museum to support the education, conservation and research programs of the North Carolina Maritime Museum in Beaufort. For each $30 plate sold, the NCMM will receive $20!  You can also personalize your plate for an additional fee. 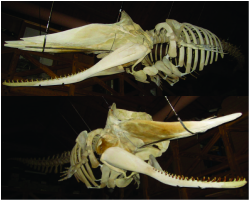 Bonehenge is the skeleton rearticulation of a 33 foot male sperm whale that was stranded on NC Cape Lookout shores in January 2004.  The whale bones were buried and the skeleton was rearticulated in Beaufort, NC by Keith Rittmaster, Natural Science Curator at NC Maritime Museum in Beaufort and a team of volunteers.  Keith Rittmaster has been studying bottlenose dolphins and other NC marine wildlife since 1985. The skeleton is now on display at the NC Maritime Museum in Beaufort, NC.

At this time, access to the National Stranding Database is only granted to participants active in the national stranding network. The fields collected in the National Stranding Database are those on the Level A form.  This form is completed for every stranded marine mammal in the United States that is responded to by a member of the stranding network. To perform a query, we need to know the information from the Level A form you are interested in receiving, and then which data you are looking for - generally a date range and a geographic area, and which species or groups of species. An example query request would be: Species, Date of Initial Observation, Location of Stranding, Condition at Initial Observation, Sex, Age Class, and Condition/Determination for all cetaceans stranding in ME, NH, and MA from 2010-2015. Please send database query requests to: MMHSRP.NationalDB@noaa.gov

Additional data (Level B and C) are available on request if appropriate research protocols are agreed to.

Check out these sites for related information