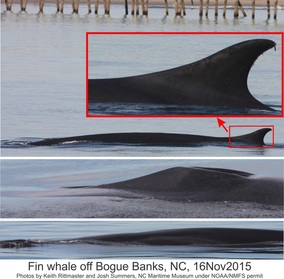 Fin Whale, Balaenoptera physalis, was sighted near Oceanana Pier on Bogue Banks on November 16, 2015, and was seen the following day off Shackleford Banks, circling around schools of menhaden. The most distinctive features visible in the attached photos that assist with species ID are 1) the shallow angle at which the dorsal fin rises from the whale’s back, 2) the faint light pigmentation, "chevron" on the body between the blowholes and dorsal fin, and 3) a single medial ridge forward of the blowholes.  Xenobalanus barnacles were seen hanging off the trailing edge of the dorsal fin.  Although this is within their range, fin whales are rarely sighted in NC south of Hatteras or near the beach.  In fact, the last two seen near this area stranded within 3 days of being sighted alive.  This animal is estimated to be 40-50 feet in length and is likely a juvenile. This sighting occurred in water depths ranging from 15-40 feet. 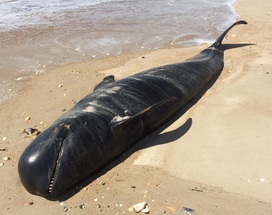 Short-finned Pilot Whale, CALO 15-09 Globicephala macrorhynchus, was reported stranded dead at the east end of Shackleford Banks in the afternoon of March 16, 2015 by Cape Lookout Biologist, Jon Altman.  J. Altman  provided transportation for our team consisting of NCMM Keith Rittmaster, volunteer Joshua Summers, and NC Central Stranding NC DMF responders, Jill Sullivan and Vicky Thayer to the island the next morning.  The stranding team met J. Altman at 7:30 am  on March 17, 2015 and loaded the gear and headed out to Shackleford Banks with two park interns, Ashley Dunn and Jessica DeBoer. The team was dropped off  with our gear on Shackleford and we walked to the whale. The whale was right side down and appears emaciated . The ribs were visible on the right side. There was some scavenger damage around the anterior side of the right eye. A suite of tissue samples were collected and the skeleton was transported to NC Maritime Museum for later rearticulation.  The skull was transported to UNCW for a long-line fishing interaction project. 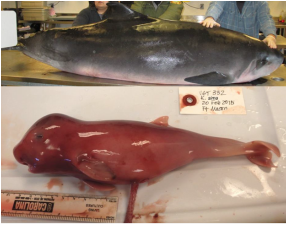 Dwarf Sperm Whale, VGT 332 Kogia sima, ﻿﻿﻿was found stranded dead by two beach walkers at approximately 10:00 am, February 20, 2015. The stranding team (V. Thayer, K. Rittmaster, J. Summers, W. Justice) met Ben Fleming, and Paul Terry at Fort Macon and found the animal right side down, partially covered in sand. Fort Macon backhoe operator loaded the animal into the NC DMF stranding truck for transport to NCSU CMAST for necropsy. The animal was necropsied at NCSU CMAST with volunteers from multiple local institutions including Fort Macon Park Service, North Carolina Maritime Museum, NC Aquarium at Pine Knoll Shores and NCSU CMAST. The flukes and head are partially buried in the sand when discovered. The left side (non-recumbent) has several areas of scavenger damage. The left eye has scavenger damage around it and is eviscerated. There are nematode round worms in the oral cavity. The dorsal peduncle and right fluke blade have several healed notches. A male fetus weighing 0.45 kg was found in the left horn of the uterus with the umbilical cord attached, and is 23.5 cm long. The cause of stranding is uncertain and the cause of death is not evident from gross necropsy. Analysis of samples may shed light on the cause of death. ﻿﻿﻿ 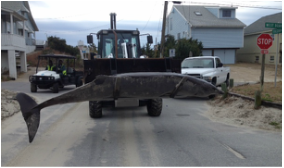 Gervais' Beaked Whale, JMS 038 Mesoplodon europaeus, was reported by Atlantic Beach Public Works on Friday, January 23, 2015 at 8:12 am at the Atlantic Beach circle. V. Thayer was at Bodie Island on the OBX and called J. Sullivan﻿﻿ in Morehead City at 8:17 am. J. Sullivan drove to the beach to assess the situation and confirm the species. J. Sullivan confirmed that the animal was a beaked whale and likely a M. europaeus. V. Thayer contacted B. Mase, NOAA SEUS Regional Marine Mammal Stranding Coordinator and B. McLellan, NC Stranding Coordinator due to concurrent military training exercises off the NC coast. J. Sullivan contacted C. Harms. E. Christiansen and H. Broadhurst met J. Sullivan at the beach to assist with logistics of moving the animal off the beach. The Atlantic Beach public works and J. Sullivan transported the animal to Hibbetts Road to obtain a weight because the animal was too large to move on and off the NCSU CMAST scales. The whale was then delivered to NCSU CMAST at 10:05 am for examination and necropsy. J. Summers and E. Singleton arrived at CMAST to assist with the necropsy. The necropsy began at noon. A full suite of tissues were collected for analysis. The animal was a mature female. 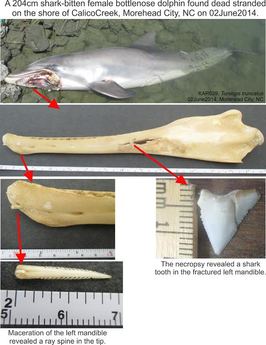 Bottlenose Dolphin, KAR 039 Tursiops truncatus, a young shark-bitten female bottlenose dolphin was found stranded dead in Calico Creek on June 2, 2014.  Volunteers from NC Maritime Museum and stranding staff transported the animal to NCSU Center for Marine Sciences and  Technology for evaluation and necropsy. The dolphin was a female subadult weighing 76.9 kg and had a large shark bite on the left head and jaw. A complete necropsy was conducted at CMAST. During the necropsy, a shark tooth was found in the left jaw. There was consensus that the shark tooth extracted out of the fractured left mandible during necropsy was from a white shark. The lower jaw was saved and prepared for educational purposes by Keith Rittmaster from NC Maritime Museum.  During preparation, it was also discovered a ray spine had penetrated the tip of the left mandible.

Dense-beaked whale, NCARI020 Mesoplodon densirostris, stranded live on June 16, 2012 in Nags Head, NC.  North Carolina Wildlife Resources Commission (NCWRC)  responded to the stranding and contacted the North Carolina Stranding Network. The 399cm whale died without intervention at the site and was transported to the North Carolina State University  College of Veterinary Medicine (NCSU CVM) by the North Carolina Marine Mammal Stranding Coordinator, from the University of North Carolina Wilmington (UNCW).  North Carolina stranding partners and volunteers from NCSU CMAST (Center for Marine Science and Technology), UNCW, North Carolina Division of Marine Fisheries (NC DMF), and North Carolina Maritime Museum (NCMM) drove to the NCSU Veterinary School  to assist NCSU Veterinarians and Pathologists with the CT scan of the whale and complete necropsy. The CT scan was performed to determine if gases from abnormal surfacing were present. Gross necropsy results found trash in the stomach including  monofilament line with a broken hook attached, and a hard piece of plastic. The animal was a pubescent male with notable findings in the brain, liver, kidneys and stomach. 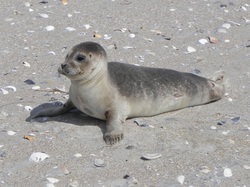 Harbor seal,VGT 265 Phoca vitulina,  was reported stranded on the morning of March 29, 2011 at the north end of Core Banks. The 100.0 cm harbor seal did not move away when approached by Park Service personnel and was easily approachable. The animal appeared thin and lethargic. Due to this abnormal behavior, the team from NCSU CMAST responded to the stranding.  The animal was located near 25A mile marker north of Cape Lookout. It was determined to be a harbor seal; approximate age was yearling. Estimated weight was 20 kg. The animal was in thin body condition, and the eyes appeared sunken. Upon approaching the animal, it was alert but lethargic. It remained easily approachable and made only a minor attempt to move away. The animal was manually restrained for examination and treatment.  The animal was in thin body condition, with prominent hips and dorsal spinous processes. The animal was given fluids intravenously and the wounds were cleaned.  It was then transported off the island and transferred to Virginia Beach Aquarium on the evening of March 29, 2011 for rehabilitation. 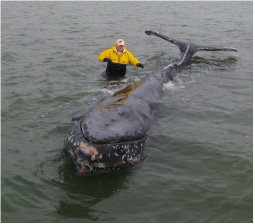 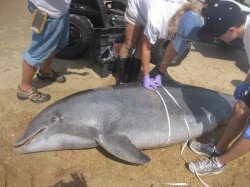 Bottlenose dolphin, VGT 245, Tursiops truncatus, was reported stranded at Mile 47, on the east end of Shackleford Banks (34.63274 N, -76.238668 W) on July 19, 2010. The Code 2, 251.0 cm male bottlenose dolphin was floating in the surf when first reported by Cape Lookout National Park Service rangers. National Park Service rangers provided ATV’s to stranding personnel so they could reach the animal. Cut surfaces of the lung revealed parasites in bronchioles.  The animal had a shark bite on the right caudal peduncle.  The skull was transported to the NCSU College of Veterinary Medicine for a CT scan and was taken back to NCSU CMAST for necropsy. 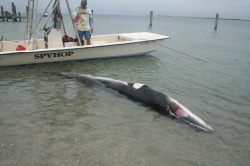 Minke whale, VGT 235, Balaenoptera acutorostrata, was reported stranded on the east shore of Cape Lookout bight on the north side of the lighthouse dock (34.62495 N, -76.52327 W) on May 19, 2010. The 410.8 cm Code 2 male was necropsied on 19 May 2010. Skin (DMSO), left lung, mid thoracic blubber, epaxial muscle, aqueous and vitreous humor, and feces were collected.  The gross necropsy revealed that the animal was emaciated; there was a hemorrhage on posterior surface of skull and a meningeal hemorrhage which could have been due to trauma during the stranding. There was a mass in the colon and milk in the stomach.